We begin our collaboration series — Blockchain For Africa, with a highlight of the Ammbr project.

Although, underrated and not surrounded with the usual level of hype in the blockchain space, Ammbr is one of the most innovative AND working products to be built, with the prospect of using a DLT based infrastructure for networks and communications.

We began to cover the Ammbr token on our old wordpress site, as a promising ICO, but as the ICO was halted, due to an announcement that the company would no longer be running the ICO. This was disappointing, however as the ICO had not started yet, so, no inherent cause for alarm. Subscribers we’re updated with an announcement that the project had in fact been, wholly, privately funded from outside investors. They also notified early subscribers that they will be rewarded with Ammbr tokens for expressing early interest, along with bounty rewards.

We felt at that stage to pull the piece covering Ammbr, as it was from the perspective of an ICO review, rather than coverage of the entire project. We expected further announcements, for which we watched and waited eagerly.

Eventually we were contacted by the team at Ammbr in September confirming the project would be going ahead…with even further details and announcements.

We’ve been waiting to cover this project for sometime, so without further ado…

Ammbr is a decentralized autonomous solution to WIFI networks. Utilizing their own patent mesh network technology, built on the blockchain and amazing mesh WIFI routers. Ammbr is bringing connectivity and blockchain together.

Whilst many of us are excited at some of the projects we’ve seen on blockchain’s, Ammbr have concentrated on giving people the ability to actually access the internet to get to the blockchain – using a blockchain. Genius! Maybe…Let’s take a more in-depth look…

‘Ammbr is a wireless mesh network built on blockchain technology, with the intent of bandwidth being traded in an autonomous market.’ – Ammbr Team

The topology of wireless mesh networks (meshnets) were originally used in radio networks, developed for military applications.  Working in the respect that node could find purpose as a dynamic router for every other node. With this method, in the event of nodes failing, the remaining nodes have the ability to continue communication between them.  In this event they could also serve as up-links for the other nodes, if necessary.  Sounds very much like how a blockchain works, no?!

Did we mention, that with this comes the possibility of sharing bandwidth on said network? No?!  We’ll revisit that thought later…

Far from being the only company to employ WIFI on a mesh network, the Ammbr team are the first to apply the topology to a blockchain powered, multi bandwitdh, multi connection, crypto rewarding application,device and infrastructure.  Try saying that without moving your lips. Ha!

Ammbr have gone out of their way to employ legacy hardware and network engineering team members, with longstanding proven track records in technological breakthroughs.

The project patent applications list, along with their idea to target countries and areas who have no benefit of communications infrastructure,via cable nor radio/WIFI seems a sure winner. Starting with African countries, Ammbr aims to connect the people of the world through a network they ‘own’. The Ammbr network has already started trialling in some African countries and as recently as March 2018 announced a partnership, with the Technical University of Catalonia (UPC) to provide R&D for economic and governance models, within the network. 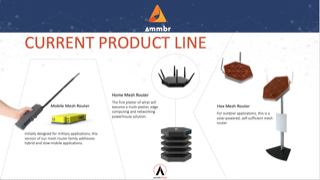 The Ammbr mesh device, is intended to perform all the tasks of a router, mesh node and more.  Starting with the fact that Ammbr have stated that the device is capable of lossless transmission over a range of 150ft, with the capability to extend over ‘several kilometers’.  The unit itself is composed of the main unit and a series of optional hardware modules.

A GPS receiver, full Bluetooth support and low-frequency module are all parts of a fully assembled setup, along with RJ45, external antenna and USB-C ports included on the unit, adding to the number of connection types and potential applications.

The envisaged fully assembled product also includes a ‘Blockchain Computing Resource Module’ and ‘Mobility Module’.  These are described in the Ammbr whitepaper as;-

Judging from the description, it seems that the device will be more than capable of handling computer intensive blockchain tasks, which will no doubt ease the memory intensive processes normally completed inside blockchain connected devices.  The Mobility module, is obviously aimed at allowing users to carry they’re network wherever they go AND in all-weather conditions.  It’s safe to say the device probably sounds like the coolest router on the planet to say the least at this point!

It would be good to see the outcome of some early trials and network penetration testing, to see how secure the device, and network really is, given the nature of WIFI signals being thrown around everywhere.  We suppose, with the use of the blockchain, bad actors could be potentially spotted and blocked from interacting with the network automatically.  Judging from the current described security protocols and technologies embedded in the router, it is likely to be immensely hard, if not damn near impossible to spoof a device on the Ammbr network.

As mentioned earlier in our article, countries in full support of rolling out the Ammbr project sandbox’s to date are mostly African.  Uganda, Sierra Leone, Republic of Congo and Guinea are among the government endorsements mentioned by the team, with many more likely to come.

For the longest time many African nations and civilizations have not had access to many types of Western infrastructure.  Things like water networks, television, telecom’s and yes, even radio’s, have been missing from many African villages and cities.  Even in many of the places where some of these things are available, they are not readily and can be massively poor in comparison to the weakest signals that we may experience in more technologically advanced territories such as the UK, US and Asia.

Back in January 2018, Nkosi, a member of the Ammbr team also visited Cape Town, South Africa to conduct research on the use of community mesh networks and how multiple networks could possibly interoperate.

The target was to cross-compile an existing firmware implementation that allows the integration of different mesh routing protocols on a single platform and thereby simplifying the formation and management of community networks.  – Nkosi – AmmbrTech Diaries – Beautiful Cape Town’s Community Mesh Networks

The possibility of connecting the unconnected, alongside providing wealth and economic status to the un-banked is a very large-scale vision for anyone, but the team at Ammbr seem to be making all the right moves!

Finding out more about what is going on with the Ammbr project is not something they’re blog overstates and they have not over hyped the projects statuses.   Instead the juicy bits are reserved for those who take enough initiative to delve into the Ammbr community.  Although, not the largest community on Telegram by far, the community is friendly and has much more adjusted discussions happening daily.  The group is not full of  ‘When Lambo’s?’ or ‘When Moon?’ type of members.  The team is directly accessible through Telegram and I admittedly had not been in there for sometime when i contacted CEO, Derick Smith, to let him know we were writing a piece on the project.

We are still yet to see many stages in the Ammbr roadmap, but we know they have not taken on an easy challenge.  After all, it is not just all about the blockchain, but provides a certified and definitive use case on what could be the WIFI internet infrastructure of choice in the future.

The company also just announced a recent decision to reopen a public crowd sale after a partnership with mining powerhouse, Global Blockchain Network, to be launched in February 2019.  Find out more here.

The outlook is certainly bright for Ammbr and their vision of bringing high-speed internet to Africa and the world!

Look out for our upcoming interview with Ammbr CEO, Derick Smith and also the following parts of our Blockchain For Africa Collaboration Series!