Facebook bans all ads for Bitcoin, ICOs, and other cryptocurrencies. What does this mean for IOTA? 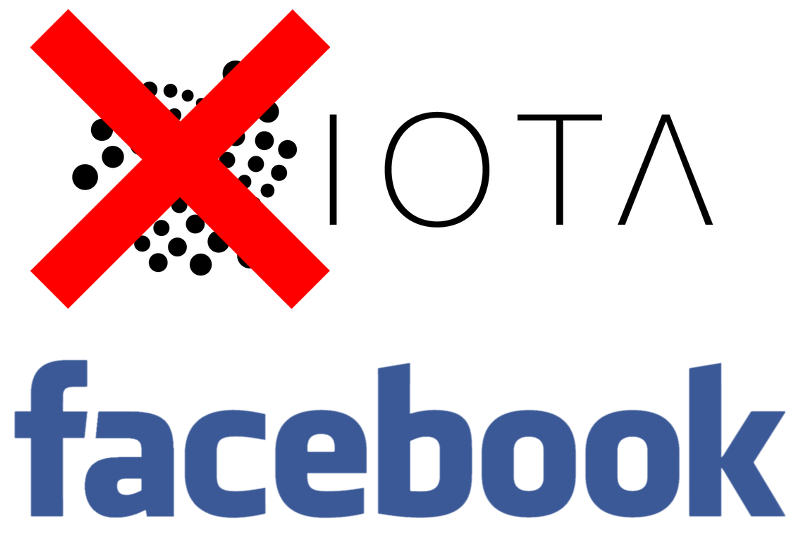 To continue our coverage of IOTA, I’m exploring how the initially alarming announcement that Facebook will be banning all crypto related ads affects attitudes to this currency, and how we can move forward.

I’d like to ask everyone to cast their minds back to around July 2017. In its update that month, Snapchat rolled out a ‘new’ feature, one that appeared to go against one of the main aims of their app. Prior to July 2017, it was clear that one of the clever USPs of Snapchat was the fact that it kept its users in ‘walled gardens’. To ‘protect’ its users, Snapchat did not allow for external links to be included in a snap; users were essentially ‘locked’ into the content produced within the app, with no ability to share content from other social media platforms. This artificial digital ecosystem had obviously worked well for Snapchat, but eventually they came to the conclusion that they had to allow the feature. Now, why might they have chosen to do this, and how does it link to Facebook’s collective ad ban?

‘Censorship!’ I hear you cry. I’m sure you’re shaking your head in disbelief: how could I question that this is censorship? I will freely admit that this was my original response. To hear that any social networking service as prominent and powerful as Facebook is thinking of censoring anything – it’s no wonder that the word censorship enters our minds, and rightfully so.

However, Snapchat had explained why they did not allow users to add links to their snaps. It was supposedly a measure to protect users against commercial spam; not just an attempt to ‘enforce’ the consumption of Snapchat-only content. Prior to the unanimous roll-out of the feature, only celebrities had the ability to link to external sites within a Snap.

Apparently, according to Snapchat, celebrities could be trusted not to spam their followers with commercial advertising – but the average user of Snapchat could not. Now, Facebook’s reason for banning all cryptocurrency ads is no doubt due to the fact that users have complained of being spammed incessantly by people on their timeline, in closed groups, in chats – to trade cryptocurrency. Or is that necessarily the case?

If you’re fairly new to cryptocurrency, you may have already faced the facts: telling a genuine post about a legitimate new coin with potential, from a spam ad advocating nothing but the coin’s trading value, can be quite difficult. I believe that we expect more integrity from those who trade cryptocurrency than those who trade Forex, for example; we tend to be less on our guard. For example, in my own experience using the Meetup app to find out about new coins, strategies, tech, and to network with more people in the crypto space, I’ve observed that we tend to start trusting each other. We have a collective grumble about being stuck on the waitlist for an exclusive event, or group together to ask for a recording or livestream of a booked-up event. In the discussion pages for Meetup groups, users often post external links to free e-books, or ‘new’ trading platforms. Some of these are definitely spam. Does it then follow that users should be responsible for themselves regarding the authenticity of these posts, or should the online platform be monitoring them?

The jury is split on the matter. However, I am choosing to put a positive spin on things for several reasons, and not just in order to protect the future status of my favourite cryptocurrency.

A quick glance through Reddit’s r/cryptocurrency subreddit yielded a constructive attitude, for the most part. Many expressed relief at the potential reduction of spam ads, some proclaiming that those who ‘felt the need to advertise’ did not advocate legitimate coins in the first place. Facebook is not one of the primary platforms for legitimate traders, as Justin Wu pointed out in a LinkedIn post on January 30th. He maintained that ‘Facebook Ads have been filled with a lot of scams, shady and terrible promises from bad ICOs & actors’ and that the key approach was to build an ‘omnipresent brand strategy’ across all social channels where blockchain and cryptocurrency are discussed.

However, some Reddit users are struggling to see the positive side in this development. A user expressed irritation at how the ban, at the moment, does not allow for subjectivity and does appear to be a complete blanket ban on any post discussing cryptocurrency, such as a link to a legitimate, informative article, or adverts for useful equipment such as mining rigs, and newly developed wallets. In the opinion of this user, the cryptocurrency community will be damaged by this as crucial knowledge will be prevented from reaching Facebook users. Despite its deficiencies regarding authenticity, Facebook remains a very popular platform for discussion, and should still be utilised. IOTA, as a fairly new cryptocurrency, would benefit from some legitimate mainstream coverage; many on the r/IOTA subreddit are working hard to ensure that IOTA receives the attention it deserves. It does seem unfair that those who are working towards improving the publicity of an emerging technology, with their motivations geared towards society’s advancement, are being punished by a blanket censorship approach.

On the other hand, like many crypto enthusiasts primarily using Reddit, I never saw Facebook as a particularly legitimate source of knowledge. I therefore choose to see this collective ban of all ads relating to ICOs as Facebook’s attempt to become more legitimate in their approach, and to actually be taken seriously as a source of information on blockchain and cryptocurrency developments. Facebook and Twitter are often guilty of the ‘fake news’ accusation, due to the fact that interaction between users does not occur within a forum, as it does on Reddit, but consists of a live flow of information that is bound to spread unverified facts, and thus give rise to false certainty. Rob Leathern, Facebook’s Product Development Manager, explained the approach in a blog post: ‘This policy is intentionally broad while we work to better detect deceptive and misleading advertising practices […] We will revisit this policy and how we enforce it as our signals improve. We want people to continue to discover and learn about new products and services through Facebook ads without fear of scams or deception.’

It is important to acknowledge, therefore, that this policy has been introduced more as a precautionary measure, and is overwhelmingly an attempt by Facebook to improve their standards to pursue a more legitimate approach. Could it even improve the public’s trust in newer cryptocurrencies such as IOTA? Last month, Mark Zuckerberg posted on Facebook about his aims for 2018: mainly, to look into integrating cryptocurrency into Facebook’s current services. Of course, this news can be viewed in a negative light as well as a positive one (the development of cryptocurrency by major tech companies could make the market very difficult for small teams), but in regard to the ban, this information reassures me that it is likely to be only a temporary measure. This situation is ripe for monthly review, so look forward to more content!